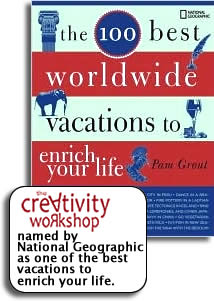 Critical judgement–the part of our brain that says, “Yes! No! It’s not good enough!” should stay at home, locked in a closet.

You may not come home from this eight-day workshop with a suitcase of paintings or a briefcase full of poems. But you will come back with a heart full of artistic passion, completely convinced that creativity and imagination–yours and everyone else’s–is the answer to just about any question the world could pose. Plus, you’ll have the tools to enable you to fill a whole cargo hold’s worth of luggage with paintings, poems, drawings, and essays.

Playwright Shelley Berc and her husband, Alejandro Fogel, a painter and multi-media artist, launched The Creativity Workshop in 1993 to help people interested in the creative process to get “out of their own way.” They became convinced after many years in a university setting, that creativity often gets squelched by one’s own judgements and by a culture that has turned it into a commodity.

“Creativity, like so much else in our world, has been co-opted into consumerism, and its worth calculated by how much money it generates”, Berc says. “We live in a culture that doesn’t encourage adults to be creative unless it looks like they are going to make money at it. But without imagination, we would not have any great scientists, thinkers, or artists.”

The aim of their workshops is not to find the next da Viinci or an up-and-coming Proust. Rather, they hope to deepen the sensibilities of the lucky individuals who enroll in them. Instead of focusing on any one art form, participants in The Creativity Workshop do it all–they write, they draw, they tell stories, and most importantly, they learn to play, play, play.

“If creativity is any one thing, it is play,” Berc says. “For a child, life is just one big erector set to b snapped together and pulled apart in a thousand different ways. But as adults, we often lose that flexibility and put away our toys as we acquire jobs, kids, and mortgages.”

Berc and Fogel believe creativity is encoded into every human’s DNA and that, even though adults become less flexible as they age, that sense of wonder and reckless imagination can be regained. In fact, by focusing on imagination rather than on creating a product per se, creativity becomes a way to view and appreciate life.

The pair know what they are talking about. Berc, a professor at the University of Iowa Writing Programs from 1985-2000, has written novels and plays that have been performed by such celebrities as Stanley Tucci, Patrick Stewart, and Tony Shalhoub. Fogel, whose award-winning work can be seen in museums and public and private collections across the globe, is not only a painter but also an expert in cultural myths and legends.

In their workshops, held annually in Crete, Paris, Barcelona, Florence, Dublin, Prague, and New York City, they lead exercises in free-form writing and drawing, associative thinking, mapmaking, sense perception, and other techniques that help people access and develop their innate creative nature. During the eight days of the program, (which is taught in English), you will spend five of them (three and a half hours per day) in class with Berc and Fogel. The rest of your time is free to explore and be inspired by the fabulous locations they have chosen for their workshop venues.

Elvy Pang
Lecturer in the Business School, The Hong Kong Polytechnic University, Kowloon, Hong Kong
“The Creativity Workshop is brilliant! One of the most life-impacting learning experiences I have ever had.”